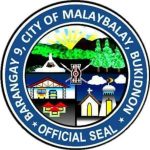 Barangay Nine has a total land area of 625 hectares. Considered as the biggest Barangay in the poblacion, it is composed of Nine (9) Puroks. Barangay 6 bound it in the east, in the west by Barangay 7, in the north by Barangay 8 and in the south by Barangay Casisang. Barangay 9 is basically a commercial area where the Public Market, Integrated Bus Terminal and the other Government and private offices are located.

To implement effectively the plans and programs of the Barangay, giving consideration on the involvement and participation of spiritually empowered people. To deliver the basic services to all concern; intensify the Socio-Economic Programs for the upliftment of one’s living condition. Create and develop strategies/programs for social transformation and balance ecology, meant to achieve our common goals toward development and maximum productivity of our Barangay.

Barangay Nine was one of the 20 Barangays created during the Marcos Regime under the Declaration of Martial Law by Presidential Decrees 86 and 86-A. Under the administration of the late Hon. Mayor Timoteo C. Ocaya, the Municipal Council passed Resolutions Number 246-74 and 249-74 and Implemented ordinance N. 87-74 by reducing the number of Barangays from 20 to Eleven Barangays. The merging of some Barangays affected the political boundaries such that Barangay 16 became Barangay 9.

Barangay Election was conducted in October of 2007 and Hon. Provo B. Antipasado, Jr. was elected as Punong Barangay and assumed the post on the last day of November 2007 thereby serving Barangay 9 as Chief Executive up to November 2010.

Barangay election was conducted in October 2010 and Hon. Yolando L. Llubit was elected as the Punong Barangay and assumed the post on the first day of December 2010 thereby serving Barangay 9 as Chief Executive up to November 2013.

Barangay Election was conducted in October 2013 and Hon. Rodrigo B. Timones was elected as the Punong Barangay and assumed the post on the first day of December 2013 thereby serving Barangay 9 as Chief Executive up to this date.

October 1, 2014, the Barangay Nueve held its 1st Araw ng Barangay with the highlight of the search for Miss Barangay Nueve, which Heartily participated and represented by all the Purok, from 1 to 8.

As part of the Tools of the Search for the Cleanest and Greenest Barangay;

It was in the year 2016, we constructed the landmark of Barangay Marker and Enhances Urban/Rural Space Greening in Rotonda Areas, Purok Entrances, and Façade of every building and establishment were planted with ornamental plants and created a new item, BESAO (Barangay Environment Sanitary Action Officer) to monitor the Implementation of Solid Waste Management in Barangay Nueve. Also constructed Barangay 9 Women’s Federation

There was no election in October 2016 so the incumbent administration under the leadership of Hon. Rodrigo B. Timones continued their service until a barangay election is made.

In the year 2017, in celebration of the 19th Charter Day, the City of Malaybalay initiates the Festival of Festivals of Which barangay 9 is one of the contingents and won 2nd Runner of the street dancing with a theme: Sinulog, on the following year 2018 on 20th Charter Day once again Barangay 9 is one of the contingents on the Festival of Fantasy with a theme: Little Mermaid; and won 2nd Runner up on the Street Dancing.

It was in 2017 that the Barangay Nine was a recipient of Bottom-Up Budgeting for two million pesos thus the Barangay Health Center and Barangay Nutrition Center were renovated to implement the intended project on the Comprehensive Health Program.

Barangay Election was conducted on May 14, 2018, and Hon. Rodrigo B. Timones was re-elected as the Punong Barangay and continued his post thereby serving Barangay 9 as Chief Executive up to this date.

In our continuous support to the Philippines Red Cross, we receive Sandugo & Mapanghikayat Award, National Level.

In December 2018, Purok 5 was split up, and created a new Purok, called Purok 9, so 9 Purok are existing in Barangay Nine.

In the year 2019, on the 21st Charter Day of Malaybalay City, a continuation of another Festival of Fantasy 2 with the theme: Tangled wherein. Barangay 9 is one of the contingents and won 2nd Runner Up in Street Dancing. During the Culminating of the Charter Day, all Barangay Officials experienced fabulous STAR OF THE NIGHT “Barangay Night and Awards Night”.