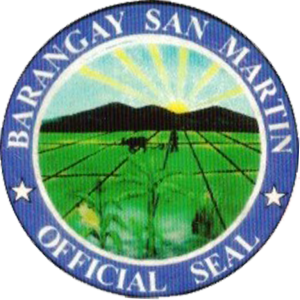 In Order to achieve this vision, we the people of San Martin, guided by the active collaboration with private sector, seek to address all sectoral issue in education , health , nutrition, peace and order, youth and sports, infrastructure, economic and environment as well administration and governance. It is our desire and hope that we will be moving towards economically improved community and total human development.

We envision Barangay San Martin as the leading barangay in agro-forest initiatives and one of the major rice, corn, vegetable producing areas with God Loving, and progressive, self-reliant people living in an agro-forest based economy in a sustainable environment under an environment friendly, active and accountable community leaders

The history of San Martin as narrated by a man whom residents fondly called “APO”. During the Spanish Regime, the lowlands was still nameless but the highlands, especially the highest peak, was called PANASIHON, in honor of a Spanish Soldier who fled the battle grounds and seek refuge in the mountain range. Panasihon was then change to Capistrano.

In the year 1949, Mr. Jose Patoc, a native leader from Linabo, decided to settle in the area. Together with fellow natives and other non-natives they cultivate the area because they have found out earlier that it has great potential for agricultural development. Illocanos, illonggos, cebuanos, boholans and tagalos, came and bought farm lots. Other people from different tribal origin followed to settle in.

The entire area was then a part of Linabo. The low land was now called “MACATOL” because as the story goes, when the time struck at 3:00 P.M., some of the people’s skin will become itchy. It may be worthy to note that a creek also named Macatol runs parallel to the Barangay Center.

The leaders of Macatol and Sinanglanan, in 1951, passed a joint resolution to the Province Board of Bukidnon requesting for the creation of their respective barangay which shall be carved out of Barangay Linabo. Their leaders were Mr. Jose Patoc and Mr. Sabino Dusbang.

It is year 1953 that their demands were finally granted. Consequently, the Bureau of Forest Development released the agricultural lot to the 39 petitioners and 58 landless people. Seven hectare lot was also released to be used as the future Barangay site.

Most pioneer dweller were catholic. Hence, they unanimously agreed to select Saint |Martin de Tour as their Patron Saint. To name their new barrio, the name that were suggested were little Linabo, San Jose, San Martin. After a long discussion, San Martin prevailed. It was in honor of their patron saint and also to Mr. Martin Callao, a former Municipal treasurer, for this valuable contributions to the barangay.

Below are the list of the past leaders of Barangay San Martin: