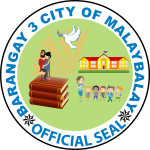 In order to achieve this vision, we, the people of Barangay 3, guided by the active and responsible leader, and in collaboration with the private sector, seek to address all sectoral issues in education, health, nutrition, peace and order, youth and sports, infrastructure, economic and environment as well as administration and governance. It is our desire and hope that we will be moving towards economically improved community and a total human development.

"Imploring the aid of the Almighty God, We envision Barangay 03 as primary catalyst for excellence in local governance, education, commerce, culture and sports development at the heart of the city, that nurtures highly educated, cultured, resilient, healthy, self-reliant, progressive, orderly and globally competitive communities, to create local opportunity, growth and impact through livelihood programs and technology, who live in a safe, clean, green and healthy environment and socially improved infrastructures, sustained by God-centered and empowered citizenry, under a dynamic, transparent, and responsive leadership."

The Creation of Barangay 3, one of the 11 Poblacion Barangay of the City of Malaybalay can be traced way back after the declaration of Martial Law in 1972. With Presidential Decrees No.86, 86A and 210 as the legal basis, Barangay in the Poblacion or urban centers of municipalities with no existing Barangay were created. At the start, there were twenty (20) Barangay created in the Poblacion by the Mayor, Hon. Timoteo C. Ocaya. With the powers vested to the city mayor, he appointed the respective Barangay Chairmen of these 20 Poblacion Barangays based on the enthusiasm and capacity to serve the community.

After a year of operation, the municipal council of Malaybalay passed a resolution Nos.246-74 and 294-74 and an implementing ordinance no. 87 S-74 reducing the number of Barangay from 20 to 11 to satisfy the Local Government code requirement that each Barangay should have at least a minimum of 1,000 population. As a result of this legal order, there was merging of Barangay thus affecting the alteration of boundaries.

In 1974, Mayor Ocaya appointed the first Barangay Chairman of Barangay 3 in the person of Mr. Guillermo N. Tabios, CPA. He was succeeded by  Mr. Jesus C. Villegas in 1975. His appointment was confirmed by the then Minister of the Department of Local Government and Community Development (DLGCD) Hon. Jose A. Rono. When Mr. Villegas transferred his residence to Barangay 1, he was succeeded by Engr. Benito Balbuena who only served for a short eriod, due to practice of his pofession. It was Mr. Epifanio Caterial who continued to serve the remaining portion of the term until the Barangay election of 1982; Mr. Caterial ran for the position of Punong Barangay and won. He was the first elected Barangay Leader of Barangay 3.