The whole eastern and southeastern border adjoining Agusan del Sur and Davao del Norte is elevated and densely forested mountains, which is one of the few remaining forest blocks of Mindanao.

The nearest sea and air ports are in Cagayan de Oro City, which is 91 kilometers away.

The climate classification of Malaybalay City falls under the Fourth Type or intermediate B type, which is characterized by the absence of a pronounced maximum period and dry season. The period from May to October is where heavy rain occurs. Rain falls at a yearly average of 2,800 millimeters (110 inches) and occurs throughout the year, though it is more intense during the country’s rainy season from June to October. On the other hand, November to April are the dry months. Compared with the rest of the country, the climate in Malaybalay is relatively cooler the whole year round and the area is not on the typhoon belt. 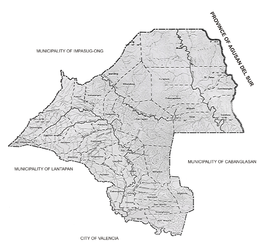 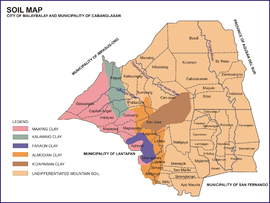 The total land area of the city is approximately 108,259 hectares (984.38 km²), that is about 13% of the total area of Bukidnon. An estimated of sixty five percent (65%) of this is classified as forestland/timberland and the remaining thirty five (35%) is alienable and disposable areas (A & D), lands which could be used for various purposes such as for agriculture or for industry.[10]

The city plays a strategic role in the protection of the headwater source of the Pulangi and the Tagoloan rivers because of its location the upper portion of both watershed areas. The Pulangi River then extends through the Cotabato provinces as the Rio Grande de Mindanao and to Cotabato City, where it empties into Illana Bay. The Tagoloan River, on the other hand, traverses northwestward towards Tagoloan, Misamis Oriental, where it joins the Macajalar Bay. These watershed areas provided potable water, irrigation, hydro-electric power and various recreation and tourism activities.

The average elevation of the city is 622 meters above sea level (2, 040.68 feet). About sixty percent (60%) of the city’s area has above 30% slope, characterized by steep hills, mountains, and cliff-like stream side. About 25% are level, gently sloping, and undulating. The rest are rolling and hilly.[1][10]

One of prominent geographical structure in the city is the Kitanglad Mountain Range, located in the western frontier, in its border with Lantapan and Impasug-ong. Some barangays (Dalwangan, Capitan Bayong, Imbayao and Mampayag) are located in the foot slopes of this mountain range. Steep hills are found in the central portion of the city (Kibalabag, Manalog and Can-ayan), where the Tagoloan River headwater can be found. The Central Mindanao Cordillera (Pantaron Mountain Range), is on the eastern side of the city, in its boundaries with Agusan del Sur province. The Pulangi River cuts across the area between the hills in the central part and the Central Cordillera in the eastern part, creating a portion of the Upper Pulangi river valley. The southern portion of the city is made up of level to undulating area, a river valley created by the Sawaga River and the Manupali River, which are both tributaries of the Pulangi River.

About sixty six percent (66%) of the city’s soil is identified as undifferentiated mountain soil and the rest are clay. The predominant types of clay are Kidapawan, Alimodian and Adtuyon, which are generally good for agriculture